The Secret in the Book 2: Legend of Travis Rountree is now online!
December 18, 2009

In The Eagle's Nest

by Andrew
Monday, April 23, 2007 @ 8:13:26 AM
Our latest film, "In The Eagle's Nest", has been completed and is ready for download! Currently there is only one viewing option, but we will be adding more soon.

The DivX version (the one that is currently up) is our favorite one, so we wanted to do that one first. We will be adding more versions for lower bandwidth users over the next few days, so if you are one of those, your wait shouldn't be too long.

Edit: The Viddler version has been added. It is much faster, but smaller than the DivX version.

In The Eagle's Nest Film Page

by Justin
Saturday, April 14, 2007 @ 10:12:52 PM
We've updated our picture-in-production, "In the Eagle's Nest" status on the site. We now have a new teaser poster, cast listing and film description. Be sure to check out our guest stars at the bottom of the cast list. 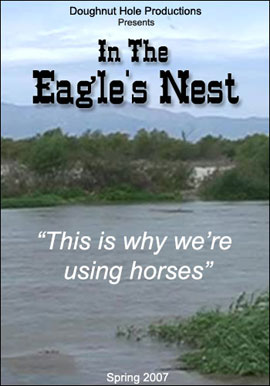 In The Eagle's Nest